Sometimes I’m wrong … like REALLY wrong, and I deeply hate it!

Once during my time as the manager for the low-income hotel, I was having a conversation with a coworker when I was interrupted by a very loud and very unusual noise.  I left the conversation to check out the lobby when I saw a random individual walking through the common area of the building while holding a bottle of wine with one hand and grasping his pants with the other.  This man was not a tenant, he appeared to be a random person who stumbled into the hotel.  He also appeared to be completely … raging … drunk.

Now normally this would be odd to see at 11 in the morning but when you’re downtown it doesn’t even show as a blip on the weird radar.  His gait was so hampered by his possibly flammable blood alcohol level that every step looked like it would be his last.  With the bottle in hand, it really felt like watching a man-sized toddler attempting his first steps to his mommy.  He was yelling loud, incomprehensible noises at some of our maintenance workers who were busy trying to get supplies from a nearby room.

I quickly moved to get between the intoxicated newcomer and our employees.  As I got closer I felt like I had to translate a language that had never before been uttered.  I heard many sounds that exploded from the wobbling man/toddler before I realized he was trying to say actual words.  After several noises I made out one of the words as, “Paaarrrttayyy!!!!”.  As a small point of clarification, properly representing the word that was heard would involve using symbols that humans have not yet invented so just understand that is the best I could do.

Now I have seen drunk people before, once my friend Frank put my cat in a freezer because … well there was no reason at all, Frank was drunk as hell (the cat was fine by the way, I got her out).  However, despite the many examples of drunk people I’ve seen, THIS person was the MOST drunk I have ever seen and he was somehow still standing and moving under his own power.  It was actually remarkably impressive how determined to “party” this man was … on a certain level at least.

As I approached the gold medalist of inebriation, I noticed a tremendously powerful and heinous smell.  I also saw a dark wet brown patch on the back of the man’s pants.  I had discovered another reason this man was like a newly walking toddler.  The discovery also explained why his pants were sagging.

I passed Captain Poopypants, got in front of him and saw his face.  He was around 50 years old and wore a large lopsided, awkward smile.  He stood there still, clutching his now understandably heavy pants as I told him he would need to leave the building.

I held upstretched hands and began to give instructions that the man needed to leave the hotel.  I was midway through giving the instructions when I was interrupted by the most-clear words I had heard come from Captain Poopypants McDrunkerton.

One of the maintenance guys came over and took over for me, escorting the man from the building.  This left me alone with my intense focus to not throw up … it also left me with my thoughts.  Thoughts of how wrong I had been previously.

I remembered multiple times in the past, females I knew had complained to me about gross men hitting on them.  They explained how violating it felt to have vile men leering over them in public.  I didn’t understand any of it, in fact I remember explaining my own clever theory.  Clearly being hit on is a form of a compliment, I would explain.  There is NO reason to be upset or bothered by someone admiring you or thinking you are attractive.  Obviously, any girl who gets upset by being hit on by someone, regardless of how he appears, is just making a big deal out of nothing … yeah, only an idiot would be bothered by being hit on by a gross person.

Well, it’s official … I’m an idiot, cause being hit on by Captain Poopypants was incredibly disturbing. 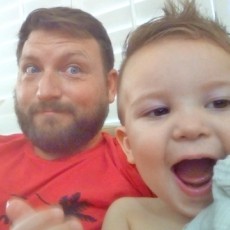