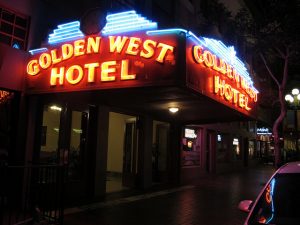 I was working at the low-income hotel, in the middle of another hectic day of trying to solve problems for an excessive number of people.  Ronald approached the front desk with a demeanor of defeat and frustration.  He had been by several times recently, always with the same complaint.

Ronald went on to clarify how our night watchmen had been unable or unwilling to check on the noisy neighbor.  I decided to just take a break from what I was doing to go talk to the individual now and find out what was going on.

I knocked on the room where the noise was originating from and Liam opened the door.  Now, Liam was one of the nicest tenants at the Hotel, just a sweet guy who always wore a large genuine smile.  Liam was also a raging schizophrenic.  He often strolled around the building wearing the same white outfit that appeared to be altered by unskilled hands and had the edges wrapped with reflective duct tape.  His unique form of flashy attire combined with his tall, lanky body made him seem like an alien … a friendly alien, not the probing kind.

Despite my few months working at the Golden West, I was shocked at seeing his room.  The room wasn’t cluttered, it was just …. Odd.  The room was almost entirely empty except for a bed that was upright, leaning against the wall next to the doorway, a row of 4 chairs against the far side of the room with a long white sack laying across them, and a fifth chair in the middle of the room with a microwave on it.  The floors were covered in a black grime that I couldn’t identify and there seemed to be no clothes or drawers in the room.

“Hey, Liam, I’ve been getting complaints there is a long of noise coming from your room during the night.  You have any idea what that could be?”

“Oh yeah, nah, that wasn’t me, the guy next door is always hammering, he’s just building and doing projects, he’s probably making noise I guess, he’s hammerin and all kinds of stuff, yeah, he’s just working all kinds of time, nah, I don’t do much, you should ask that guy with the hammerin…”

Liam spoke in a way that tended to just have all his thoughts spill out in whatever order they managed to escape from his mind.  I held up my hand and nodded as a sign of understanding and went next door to meet this neighbor who was apparently up all night hammering.

The door swung over to reveal an older gentleman wearing thick glasses and oxygen tubing.  He was also the occupant of one of the cleanest rooms in the hotel with almost zero personal property.  Among the few items he owned was NOT a hammer.  Instead of explaining all the reasons why I came to his room, I just told the tenant I came to his room by mistake and wished him a good day.

“Liam, that guy doesn’t have a hammer, and I’m pretty sure he’s not being super active at night.”

“You know what, we’ll come back to the invisible hammers later, Liam, in the meantime, why is your bed standing up?  Where do you sleep?”

“Oh yeah! Well, I made myself a couch over here!”, Liam said as his smile grew larger as he relished the chance to show off his prize invention.  “You see, I don’t need no bed, I just come over here and sleep on my couch!”  Liam climbed on top of the white roll of linen, that appeared to be a bunch of pillows rolled up in a dirty white sheet.  He curled up in the fetal position on top of his odd “couch”.

“This is way better than a bed, it’s better when you make it yourself, now I don’t need a bed, so I turned my bed into a tv stand, then I get to sleep over here on my couch, yup…”

“I’m sorry, Liam, did you say you turned your bed into a tv stand?!”

“Yeah, I needed a tv stand, and it works great, I just lay here on my couch and watch tv.”

I took a couple steps into the room and saw that he had a stool next to the bed. There was a tv on it leaning against the upright bed.  The tv was not plugged in but I guess Liam didn’t need it plugged in to be able to watch it.

After a long and repetitive conversation, I discovered that every night, Liam, redecorates his room and changes everything about it.  However, no matter how he arranges his room, he never sleeps on his bed.  I’m honestly not sure if he sleeps at all…

I debated if I should tackle the difficult task of explaining that he shouldn’t be active all night and that he should sleep on his bed, but instead I just moved him to the lower floor so he wasn’t above anyone.  Honestly, I just hope one day I find as much happiness in something as Liam finds in his chaircouchbed and his tv bedstand.